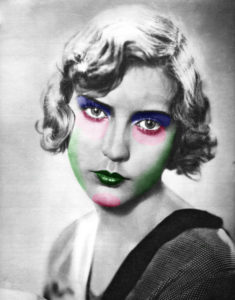 Why is blue more photogenic than white? This is the question Talbot asks himself in his book entitled The Pencil of Nature (1844).
In a conference at the Club des Amis du Septieme art, on April 11, 1924, Jean Epstein defined “the photogenic element” as the property of the filmed thing to appear more beautiful in the cinema under the gaze of the objective. The photogeny is found between technique and poetry, in the difference between what the human eye can perceive and what the camera eye can perceive. The success of this new concept, however, contributes to overstretch its use in the mainstream press, whether it is to make it a distinctive criterion for film quality, or more trivially a distinctive element of actresses’ beauty. Photogeny thus gradually becomes a beauty criterion in its own right. Interested by this screen / reality dichotomy, which is reflected in the emerging concept of photogeny at the beginning of the 20th century, Hélène Bellenger carefully collected images and articles in film magazines from the 1920s to the 1950s.

Through an almost compulsive collection of standardized and decorative female motifs, the young artist has discovered, during her research, strange make-up recipes with a “Warholian” look. Continuing this collection, Hélène Bellenger discovered a cosmetic industry adapted to the image technology of the 1920s and 1950s, at a time when films were still monochromatic and orthrochromatic. To highlight the contrasts and expressiveness of the faces, the makeup was accentuated to the grotesque (royal blue on the eyelids and lips, a touch of suffering yellow on the nose, green cheekbones in powder). Through a protocol of digital coloring, faithful to the recipes of makeup, Hélène Bellenger has brought back to the surface the colors invisible to the screens of the time. The portraits we observe seem clownish and disturbing, and lead us to reflect on the confusion between beauty and photogeny, screen and reality.

Powered by topical issues, particularly with regard to the gender conditioning of our visual culture, this project, developed in the collections of the Cinematheque de Toulouse with the Residence 1+2, aims to deconstruct the objectification of women for the screen and thus highlights the realization of the canons of beauty. Besides cinema, which has contributed to the normalization, fragmentation and standardization of women, the entire building of Western visual culture is at stake.

Born in 1989, Hélène Bellenger is a french visual artist who lives and works in Marseille. After gratuating in law and art history, she decided to specialize in photography and contemporary art at the Sorbonne University. In 2016, Hélène Bellenger graduates from the French National School of Photography in Arles. Through the vocabulary of image collection and reappropriation, the differents works of the emerging artist tends to question the roots of her western visual culture, in order to challenge the “re” of representation.
Her installations were exhibited in 2016 at Agnès B. Gallery and at Binome Gallery in Paris, as part of the collective exhibition The folded eye. In 2017, her work Placebo Landscape has been published in the renowned international review of contemporary art, Art Press No. 440, GoogleEscapes, landscape in the post-photographic era, and selected by the eminent Salon de Montrouge, dedicated to emerging artists. The same year, Hélène Bellenger was invited by the French Institute of Egypt to present her first solo exhibition at the Soma Gallery in Cairo (Egypt). In 2018, the young artist is laureate of the Dior Prize for Young Talent Photography, for the ENSP, and exhibited at the Luma Foundation during the Rencontres d’Arles Photo Festival. Her work Right Color was recently exhibited for the Circulation(s) Festival at 104 in Paris, and Circulation(s) Hors-Les-Murs at Scena 9 in Bucarest (Romania). Most recently, Hélène Bellenger toke part of OSMOSCOSMOS exhibition at the Photographic Center of Geneva (Swiss), with the well-known artists Hans-Peter Feldmann, Jean-Luc Moulène, Thomas Ruff, Vivian Sassen and many others.
www.helenebellenger.com